I have a new project.

This project is dedicated to my two grandmothers and the house that my mother's family had built over a 100 years ago.

My great grandmother's family, the Lee's had built this house in my home town about 150 years ago. While that part of the family was no longer living in that house when I was growing up, the house existed in that spot up until I moved to NY. That hill is still known in my local village by the older generation as "Lee's Hill". Unfortunately the house was torn down after I left. I don't know what the inside or the structure may have been to come to this decision and I do know that where the house was situated was very dangerous as the driveway was on the downside of the crest of the hill, so pulling out of that driveway was treacherous. Still it makes me sad.  My dollhouse looks nothing like the white farmhouse of my relatives but it is dedicated to that house in spirit. 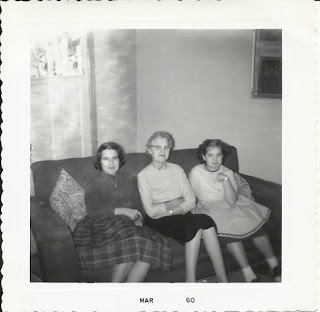 My maternal great grandmother Jessie grew up in that house with her brothers and sisters. She grew up in teens and married in 1924 for about two years. That marriage dissolved and she raised my grandfather by herself from 1925 until he left home for the army. She got all of $5 in child support for him! Can you imagine being a single mother in the 1920's/30's? She deserves to be honored for that.

My paternal grandmother went by Jenny as she hated her given name. She was the grandmother that doted attention on my brother and myself as we were her only grandchildren. She was an avid seamstress and I credit her with my love of all things crafty. She was born in 1922 and as my little Kewpie-like doll is about five years old, I set the year of the dollhouse in 1927 after my grandmother.

On one lunch hour I was googling random things and I thought, I wonder if anyone did an Arts and Crafts dollhouse and sure enough someone had! I love the Arts and Crafts movement and wanted to do a 1920's style house that was done up in that style.

As synchronicity will happen, after about two weeks I found a person locally on a Facebook buy and sell page that was selling this Bentley Hill dollhouse for $30! It wasn't perfect and was missing some parts but this is an expensive dollhouse any day of the week and I don't have that kind of expense account so I snapped it up. It barely fit in my car. 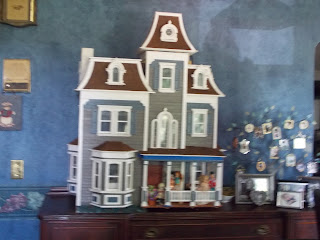 The dollhouse was probably 80% done. They didn't do many of the shingles and they weren't included so my shingles aren't the same as what was initally started. The house was a horrible yellow and green color scheme that I repainted quickly. My paint was a paint sample I got from a local big box diy store. I highly suggest doing that, it cost me maybe $3 and it's quality house paint. I added the shingles, a door, painted the entire exterial of the house and added a mailbox and porch swing, because, doesn't every farmhouse need a porch swing? 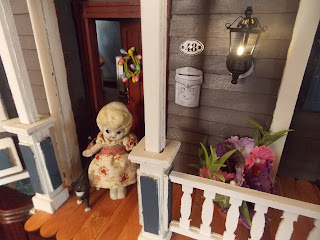 Jessie Jillian with Mr. Mittens on the porch.

That is the front of the dollhouse. Next post I'll show you the first room that I finished. The sewing room. Stay tuned!