It's rare when I treat myself.


Like many busy parents, I save up all my vacation time for the unexpected. The sick child, the mid-day appointment or some emergency repair (think furnace) to the home that I have to be there for. Occasionally, I'll save up a week all year round  to visit the family back home for Christmas. Rarely do I take the day off just for a "mental health" day.

But sometimes the stars come into alignment and an opportunity presents itself that seems be custom made for you. This is what happened this week. 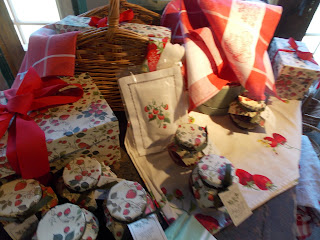 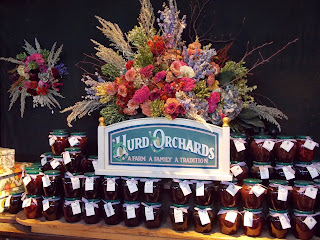 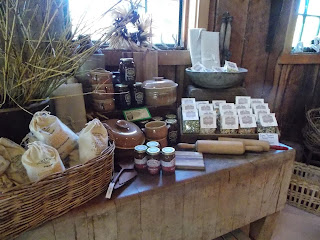 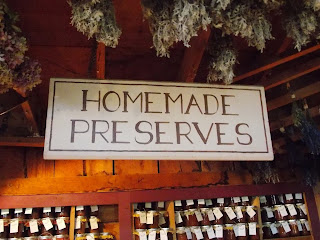 Hurd Market is a 200 year old family farm located just a hop, skip and a jump from the Farmhouse in the Field (http://www.hurdorchards.com/). Sue and Amy Machamer honor their farm family heritage by not only continuing the fruit business created by their predecessors but by redefining it to create an unique farm experience for their visitors. Their farm market is exquisite and for years I've secretly wanted to attend one of their luncheons but just could not justify taking one of those coveted days off for something so self-indulgent.

In getting one of their annual "newspapers" last week I saw something I could not resist, they had a "Cobblestone Luncheon".


Local history and a luncheon that dates from that time...oh yeah, I'm in. Our lunch was served in the manner of the time with each portion being served on it's own plate. We were told that the land around this area had made the pioneers of this land rather affluent and they had wanted any visitor to the area to know that they were just as cultured as anyone in Paris or anywhere else.

Our lunch was delicious and made with products grown on the farm. Now I'm not one of those people who constantly photographs the food they are about to eat, but this was so pretty I just couldn't resist.
These recipes were out of a 100 year old local
cookbook for Orleans County. 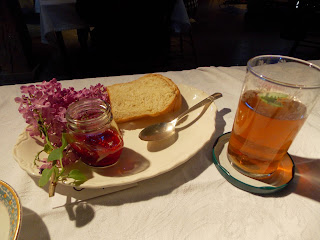 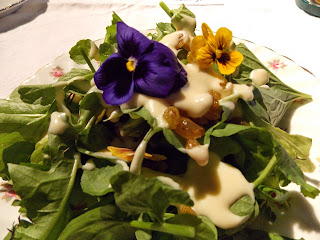 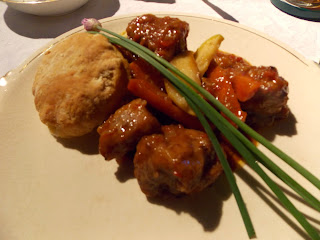 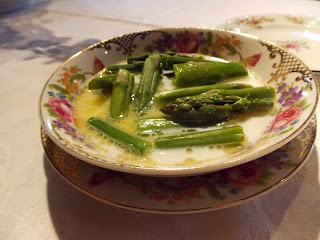 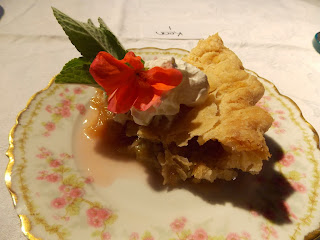 The meal was served in their "barn" which was so pretty. Prettier than any barn I've personally be acquainted with... 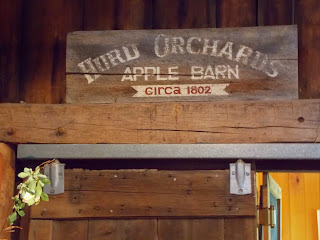 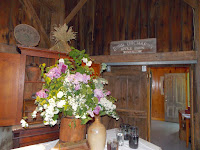 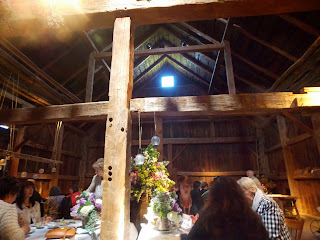 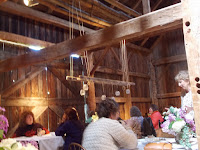 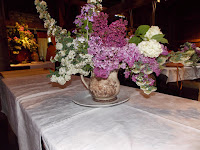 I love the history of the common person throughout history. Sure wars, heros, dates and events are important to the development of a culture but in between spectacular events, people lived everyday lives which, it could be argued, built this country every bit as much if not more that the big proceedings


Unbeknownst to me, I was not aware of how unique the area in which I lived was.

Apparently 13,000 years ago, Ridge Road was a giant beach marking the southern end of what was then called "Lake Iroquois" now, Lake Ontario. This lake was the result of melting glaciers whose deposits make the land very fertile and perfect for farming and stone fruits. This is the reason you'll find fruit trees all over this region.

The lake also created little cobblestones through it's rolling action and deposited them all over the area as well.


When settlers first came to this area called the "Black North" due to the extensive forests, they built log cabins like they had elsewhere to clear the lands. (The "Black North" by the way is a restaurant on the edge of Lake Ontario.)  Eventually, they discovered that stylish homes could be built with the surrounding cobblestones and the cost of materials was simply the labor to gather the free cobblestones. Rubble walls were built with veneers of cobblestones anywhere from 1 to 2 feet deep. Local masons would imprint designs into their work and no two cobblestone houses are the same.


After about three runs, the mason would have to let the house cure for a period of two weeks before the work would be hard enough to put on another three runs. It took 3-4 months on a good year to get a house done. 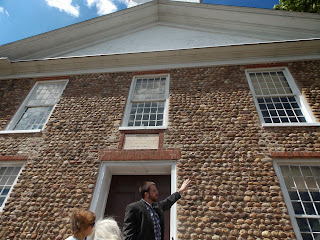 Amazingly enough, this was apparently a fairly exclusive phenomena for the surrounding area. 95% of the cobblestone houses in North America reside in western NY with a sprinkling of some in Colorado and Ontario. We toured the oldest cobblestone church (built in 1834) in North America. This was in use on and off for about 40 years and had been revamped several times. 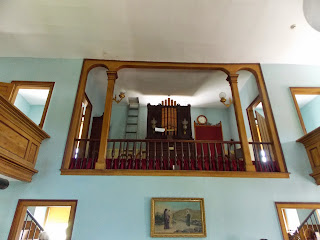 We visited the cobblestone one room schoolhouse that had been in operation until 1953. 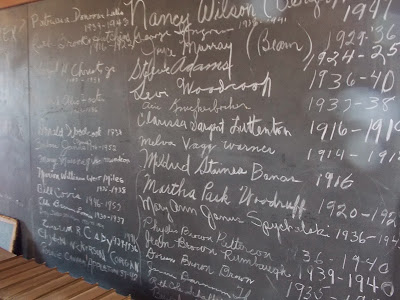 Visiting alumni of the little schoolhouse, came in and signed their names on the board. If you look closely, you'll see students that attended back in 1914 & 1916!

The county historian also allowed us to tour the Wade house that had briefly been owned by Horace Greeley.  The couple that "owned" this house couldn't sign for the mortgage and Mr. Greeley was apparently a relative who signed for it. 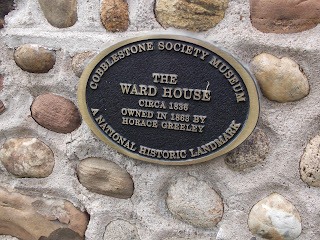 The husband died and Mr. Greeley had to take ownership for a bit of time.


This was set up as a middle class home. 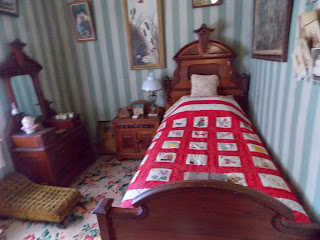 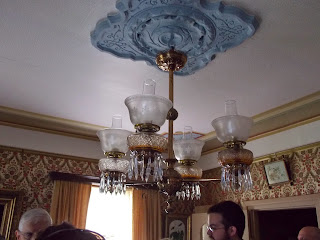 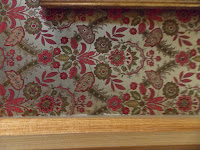 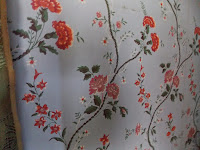 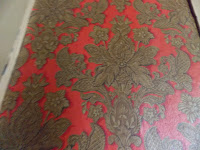 Wallpaper from the Victorian time period was not all soft colors and frilly patterns as people seem to believe and immulate. The red wall paper is close to what I have in my house. In many ways, the amount of pattern and the colors can be very garish.


Another gentleman in the area was had a cobblestone house that had been in his family for well over a hundred years plus and was revamping it to his grandparent's time. It was absolutely beautiful and really a wonderful place to see how people would have actually lived. 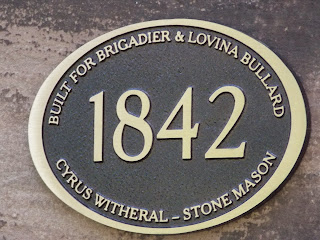 The dining room is ready for supper.. 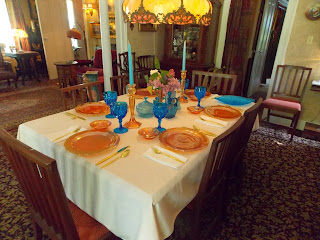 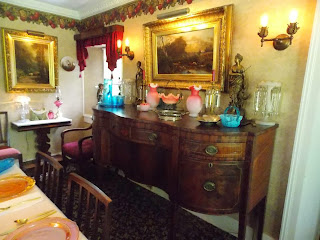 This was such a fun and fulfilling day. It's so incredible to think that this was in my backyard the entire time and I never knew it. I guess the lesson here is too look around your own community and you'll discover amazing things about the communities that you live in. There is so much history to take in, perfect for a day trip or a staycation. I know this summer I'll look around more closely to find more local opportunities!

So last Saturday I was out on an errand and decided to treat myself to what my husband calls my "shiny places" for a bit of fun. "Shiny Places" are places that you just loose time in, the phrase coming from the "deer in the headlights" type of hyponosis that happens in a place that I enjoy... i.e. craft stores, bookstores and in this case, an antique shop.

I'm not in for antiques for the sake of antiques.... the older I get the more nostalgic I get.
I wasn't looking for anything in particular but then I found it. 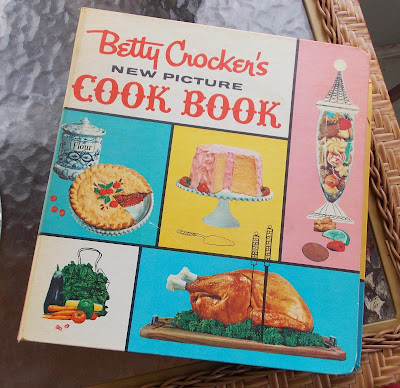 This is my mother's 1961 Betty Crocker Cookbook. This is the golden chalice, the sword in the stone. 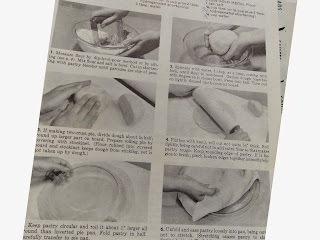 My mother bought this cookbook when she was in high school. Not only did she learn to cook out of it but so did I and my nieces. Why is this cookbooks so spectacular? Well, because it was written almost like a storybook with inserts about housewives long forgotten who submitted these recipes and what they loved about it.

It has helpful hints and directions on purchasing food and preparing food.


But perhaps the reason I love the books so much is because like all cookbooks (and I collect LOTS of cookbooks), it shows a snapshot of a particular point in time.


Cookbooks offer us a glimpse in time as to what life was really like and what was valued and cherished. Memories of mom or dad cooking something not only to fill our bellies but to build memories. As Louise Fresco said:


Food, in the end, in our own tradition, is something  holy. It's not about nutrients and calories. It's about sharing. It's about honesty. It's about identity.